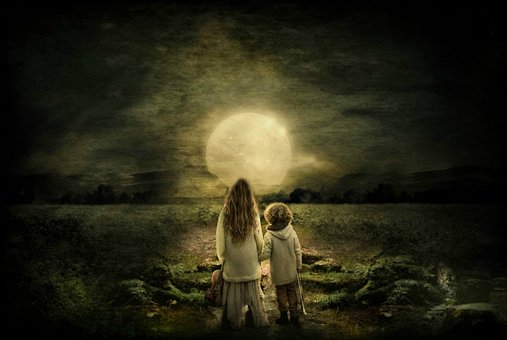 I’ve been interested in parapsychology for many years, since I went on an experimental course which convinced me of the reality of telepathy, clairvoyance etc. So here I’m not going to get into a debate about whether such parapsychological powers are real or not. I’m going to assume that they are real, whatever hardened sceptics might say. Parapsychology is important because such abilities cannot be understood within the dominant materialist paradigm of modern science, and it is therefore part of a new emerging worldview for humanity.

My purpose in this article is to ask the question, if such powers are in theory available to everyone, why do we not all access them more frequently? There seem to be two possibilities. One is that we have an innate ability, but simply grow out of this as part of the normal process of life. The alternative is that we are educated out of it.

Evidence which suggests that we may have an innate ability, is that it is believed that telepathy works best in relaxed, meditative states, which are related to an alpha brainwave pattern. It is therefore interesting that “EEG studies of the brains of children under five show that they permanently function in alpha mode — the state of altered consciousness in an adult — rather than the beta mode of ordinary mature consciousness”¹.

Psychic abilities like telepathy suggest that a person is more than a separate individual, rather part of an interconnected, collective psyche. There is a phase in the life of a baby when this appears to be the case. As Peter Russell says: “The newborn baby is aware of the environment but does not appear to differentiate himself from it. He is not aware of himself as a separate entity. As awareness of physical separateness from the mother begins to grow, so does the awareness of separateness from the rest of the environment. According to most psychologists, a true sense of individuality does not develop until simple language has begun to develop (some, such as Jean Piaget, would claim that full identity of the self is not attained until the age of seven or eight)”².

That age was also considered significant by Dr. Ernesto Spinelli, who did some experiments which seemed to show that young children had considerable telepathic powers. He found that three-year-olds did best of all, but the apparent ability then declined until the age of eight, when the results were similar to those of adults. His interpretation of his successful results was that telepathic power is a sort of externalised thinking that disappears once the child learns to do his thinking inside his head. This would suggest that the loss of power is part of the normal process of life, as the child begins to understand that he or she is a separate individual.

Unfortunately other researchers failed to obtain similar results³. Failure to replicate is considered fatal in science. Let’s consider, however, why he might have been successful when others failed. Parapsychologists often say that results are improved when participants have an emotional engagement with the experiment, whereas regular science is conducted in an atmosphere of cool objectivity. Spinelli apparently made his tests appealing to the children, using bright colours, puppets, and thinking caps for the children to wear.

There is an interesting book by Cassandra Eason called Psychic Power of Children⁴, which contains several examples of psychic ability in the very young, many of which come under the general heading of clairvoyance, the awareness of events happening at a distance. These stories are, of course, merely anecdotal, and would not qualify as scientific proof. They are nevertheless very interesting. The book opens with the story of her two-and-a-half-year-old son, who suddenly announces during breakfast that his father has just had a motorcycle accident, but that he is all right. This turned out to be true.

As one might expect, such experiences occur most frequently between close members of the family, and often in relation to death, accidents, or danger — what Eason calls telepathy under stress. Young children can be aware of these, even from a long distance, and make accurate statements about the details. As well as awareness of concurrent accidents or deaths, she also provides examples of apparent premonition of an accident, precognition, even a precognitive dream. The psychic link can also pick up good news; one child became aware of the exact time of the birth of his brother in hospital, even though he was at the family home with a babysitter.

Moving away from ESP, in this interesting Medium article, Rebecca Romanelli says: “The majority of my dreams were peaceful and magical when young. I traveled to other planets, flew faster than a hummingbird and encountered creatures and beings delivering private messages. I often woke up, still partially existing on another plane, a state I would come to know as a hypnogogic transition. I liked this feeling. The world was familiar, but I was sensing it in an altered, fluid and open way. A space without assumptions and contained with elastic boundaries”. This suggests that she was living in a magical, mythological world, of the type that young children are so attracted to in their waking lives. She also seems to be describing the psychological stage where the ego has not emerged from the collective psyche.

William Wordsworth understood all this in his famous poem: Intimations of Immortality from Recollections of Early Childhood. (What an amazing title that is!) The beginning of stanza 5 spells it out with great clarity:

“Our birth is but a sleep and a forgetting: The Soul that rises with us, our life’s Star, Hath had elsewhere its setting, And cometh from afar. Not in entire forgetfulness, And not in utter nakedness, But trailing clouds of glory do we come From God, who is our home. Heaven lies about us in our infancy! Shades of the prison-house begin to close upon the growing boy”.

This process of closing down is analysed brilliantly by Alan Watts, the well-known writer on spiritual matters, who calls the pre-ego ‘clouds of glory’ state floodlight consciousness, and the restricted ‘prison-house’ state spotlight consciousness⁵. Also relevant is what is known as the Transmission Model, the idea that the brain is an organ which filters and limits consciousness. I believe this term was coined by William James, but Aldous Huxley popularised it.

In this context, here are a few more observations:

Wordsworth and these others seem to be suggesting that this loss is an inevitable, even if regrettable, part of life’s process. This may be so, but it also seems true that to some extent we are educated out of the original childhood state. This is the second alternative mentioned above. Spinelli came to a conclusion along those lines: “telepathic powers come from the same source as ordinary thought but that in the young child, this ability has not been suppressed by learning”⁷. It is also true that children can be criticised or punished for making parapsychological statements, and told that they need to ‘grow up’. It is not surprising therefore they might seek to repress their abilities.

Uri Geller is a controversial figure, some doubting his claimed powers. Nevertheless, researchers frequently say that children are especially proficient at metal-bending. Here is an example. The open-minded biologist Lyall Watson tells this story. “Last year, I was in my home village in Ireland, I was sorting through my things and found a video from a decade back of Uri Geller bending a key in my company. I took this over to a neighbour’s house to show them, because they had asked to see something like it, and we sat and watched it on their television. It was just the sort of thing you’ve seen him do often enough. The difference on this occasion is that I had sitting with me on my knee my neighbour’s youngest daughter, a child of three of whom I’m very fond. We watched it together and afterwards, I simply pulled out my own large steel latch key and gave it to her. ‘You try,’ I said. By implying that this was something that everybody did, I gave her permission to do it. And she did. She simply stroked it like Geller had done and it flopped like limp spaghetti”.

He goes on to analyse what he thinks is happening: “The problem here is that I’ve seen this happen dozens of times, but I can’t do it. I know it is possible because I’ve seen it done, but there’s part of me that knows it is impossible, part of me that’s tied to my education that says that it can’t happen and as a result, I can’t do it. That little girl didn’t have my problem. No one had told her it was impossible. I had implied everybody did it by showing her someone doing it, and so she did it”⁸. So Watson didn’t manage to escape Wordsworth’s shades of the prison-house.

We are faced with some interesting questions. Is the phase of evolving consciousness with loss of psychic powers, shades of the prison-house, essential for the ego’s development and its sense of security, or can it be avoided? Is it in any way damaging to children to remain in contact with the early magical self? Could we in fact retain the sense of magic throughout our lives? Should we be playing ESP games in primary schools, in order to maintain children’s connection with that world? These are questions for professional psychologists, and unfortunately I don’t know the answers.

As an aside, it is interesting that this whole process is described in the early cards of the major arcana in the Tarot deck, which depict the course of an ideal life from a spiritual point of view. The second card in the series represents the phase in the womb, or possibly the moment just before birth, when the self is still whole, undifferentiated, remaining as close as possible to its source, the soul. And interestingly, this card is called the Magician. Might we say that when we are in close communication with the soul, then magical things like psi are possible, that magic and psi are our natural inheritance? The third card is called the High Priestess, which represents the phase when the baby does not yet experience itself as a separate entity, when it is still immersed in the interconnected, collective psyche. The fourth card is called the Empress, representing the bonding process with the mother, and the gradual realisation of oneself as a separate individual. This is followed by the fifth card called the Emperor, who is a father-figure, an educator, a disciplinarian, the one responsible for teaching children how to adapt to and live in the world. In the Tarot this is seen as a necessary phase, and could easily be the time when children begin to forget their magical beginnings. I suppose it depends on what the father-figure teaches them.

3. This case is actually quite complicated. Spinelli’s results were criticised by the notorious sceptic Susan Blackmore, who failed to replicate them. Then both their work was criticised by Rick Berger, whose critique was then criticised by Markwick [first name unknown]. So the whole thing is a bit of a nightmare. It’s perhaps better to trust the anecdotal evidence which follows. For details see: https://www.thefreelibrary.com/Psi+or+sigh%3F+Evaluation+of+the+spinelli+and+blackmore+experiments+of…-a082066933

8. Watson told this story in a lecture to the Mystics and Scientists Conference, 1988, as recorded in The Spirit of Science, David Lorimer (ed.), Floris Books, 1998, p186