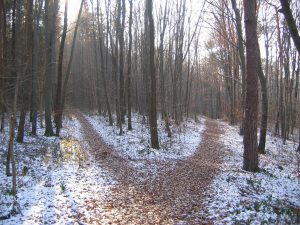 1859 was the year in which the first edition of Charles Darwin’s Origin of Species was published. He had been putting this off for a long time, but felt pressurised when he discovered that Alfred Russel Wallace had come up with the same theory of evolution by natural selection, and did not want to be upstaged. Luckily for Darwin, it seems that Wallace was not competitive by nature, and did not feel the need to try to take exclusive credit for himself.

Darwin’s name went on to be associated with the theory, and for a long time Wallace was forgotten. That is my first reason for claiming 1859 to be a crossroads. Science chose to celebrate Darwin, whose theory became a cornerstone of the modern philosophy of atheistic materialism. Suppose it had chosen Wallace instead; he went on to write The World of Life: A Manifestation of Creative Power, Directive Mind and Ultimate Purpose. He was therefore a believer in God and what we now call Intelligent Design. He was also a firm believer in spiritualism. What would the world look like now, if he had become the dominant theorist instead of Darwin?

Wallace’s role in the development of the theory of evolution has been recognised more widely in recent years, although the same thing cannot be said of his later beliefs. Extraordinarily and inexplicably, the comedian Bill Bailey, who claims to be a big fan and student of Wallace, in a BBC documentary (1) described the theory of evolution by natural selection as “one of the greatest scientific ideas of all time”, but said that Wallace had taken “a path which would ultimately lead him to deny God”. If this was not a deliberate lie, then it was ignorance on a grand scale. (I’m trying to convince myself that there isn’t some kind of sinister plot going on.)

Less well known is that 1859 was also the year when Alexander von Humboldt died, a name almost forgotten nowadays, but a giant figure in the world of science at the time, and a prolific writer. He was “a Prussian polymath, geographer, naturalist, explorer, and influential proponent of Romantic philosophy and science”. His most important work was Kosmos, a multi-volume treatise which outlined a “holistic perception of the universe as one interacting entity”. He believed that the universe was created, and was subject to a controlling power (2). He was therefore thinking along the same lines as Wallace, and was a forerunner of James Lovelock and his Gaia hypothesis, standing in a tradition which the latter said “has been widely held throughout history and has been the basis of a belief that coexists with the great religions” (3).

‘Enlightenment’ thinking has therefore promoted Darwin, and rejected Wallace and von Humboldt. If only we could go back to 1859 and choose the other road. Actually we can. If there can be a Renaissance of ancient spiritual ideas in medieval Italy, then there can be a Renaissance of the ideas of Wallace and von Humboldt in modern times. Bring it on!