I believe that quantum physics is the most significant cultural development of the last hundred years, not just for science, but for society and civilisation in general, and this for two reasons. It is at the vanguard of a new scientific paradigm, an emerging worldview that can potentially rescue humanity from the follies of scientific materialism. At the same time it is rediscovering and connecting with the ideas and the worldview of ancient peoples before the advent of the philosophical and scientific movement known as the Enlightenment. It is thus the foundation stone of a reunification of science and religion, a tool in the battle against atheism and secularism, which is a necessary way forward for humanity. These are, of course, not original ideas of mine; they are prevalent in much scientific literature of the last fifty years, which is where I found them.

I recently gave a Zoom talk on these themes, which included positive references to several quantum physicists. I was surprised therefore when I received a comment afterwards via email, criticising me for praising quantum physics in this way. My correspondent wrote: “On the one hand you warn about the physicalist, reductionist science paradigm, yet you quote many quantum scientists. I started out as a physicist specializing in theoretical, nuclear and astrophysics, but always had difficulty with quantum mechanics. Being doubtful of theoretical physics (as you point out what is genuine science and what is metaphysical presumption), my career has been in practical materials science”. My critic then lists some of the appalling technology that, in his estimation, quantum physics has brought us.

I responded, asking for some clarification, specifically on the point that he seemed to be including quantum physics as part of the physicalist paradigm. In his reply he said that he was indeed saying “that quantum mechanics is part of the physicalist paradigm. This paradigm has been developing during the centuries of the modern era; QM is an extension of the physicalist paradigm, modifying it but does not break out from it. Most of QM thinking is abstract, theoretical and disconnected from any experience of nature, and while thinking in this space we lose sight of the scale and proportion to which it refers. I remind myself that QM is the mechanics of the very small, at the level of the atom and deals in idealized concepts and relations, and it is so easy to assume erroneously that these ideas apply to all realms; quantum in this context means small amount”. (All italics mine, in order to highlight the points with which I take issue.)

I was very surprised by these comments, since my correspondent is highly intelligent, involved in and deeply knowledgeable about spiritual matters. I had always thought that the main problems preventing the new paradigm inspired by quantum physics from breaking through were, firstly, that its implications have not been sufficiently appreciated and incorporated by the other sciences, specifically evolutionary biology, and secondly that its implications have not sufficiently penetrated the consciousness of the general public. I had not considered the possibility that it could be rejected in principle in this way. I therefore thought it would be worthwhile to do a series of articles on the relationship between the quantum physics revolution, the new scientific paradigm, and their connection with the spiritual traditions of the past, hopefully to make these connections as clear as possible. In this introduction, I’ll begin by responding to these criticisms, leaving the most important until last:

1. With regard to the technology developed from quantum thinking¹, any new knowledge can be used for both good and evil purposes. One obvious example would be that, as soon as humans developed powered flight, it was used to drop bombs. Also, the study of chemistry and biology increases our knowledge of life and the universe, allows advances in medicine, but humans can also use the knowledge to create chemical and biological weapons. So I would argue that knowledge is neutral, and that the underlying scientific theories cannot be held responsible for human behaviour.

2. On the nature of the theory, my correspondent describes quantum mechanics as “ abstract, theoretical and disconnected from any experience of nature” and purely mind without emotion. We can easily agree that the maths and the equations are abstruse, and incomprehensible to anyone other than specialists, also that the theory is abstract. (It is not so clear that it is disconnected from nature, as I will discuss in point 3.) Quantum physics has been described as the most successful scientific theory of all time. By this is meant that its experimental results have been precisely confirmed many times over. There is, however, no general agreement about what it all means, i.e. the philosophical implications; there are various interpretations of the theory. Nevertheless, there is a certain consistency in many of the statements made by quantum physicists when, getting away from all the maths and equations, they write for the general public about what they think the experimental results of this obscure science imply.

3. My correspondent believes that the quantum realms (the micro-level) are distinct from, and apparently unrelated to, everyday reality (the macro-level) where classical physics applies. He says that “we lose sight of the scale and proportion to which (quantum mechanics) refers. I remind myself that QM is the mechanics of the very small, at the level of the atom… and it is so easy to assume erroneously that these ideas apply to all realms”.

He says ‘erroneously’, but the very least that could be said is that this is a minority viewpoint; I’m struggling to think of any physicist who makes such a bold claim. On the contrary, according to scientist/philosopher Bernardo Kastrup: “The scientific consensus today is that classical, macroscopic physics arises as the compound result of fundamental microscopic (quantum) laws, only the latter being metaphysically real”. On that point he quotes physicist Erich Joos: “Simply to assume, or rather postulate, that quantum theory is only a theory of micro-objects… leads to the endlessly discussed paradoxes of quantum theory. These paradoxes only arise because this particular approach is conceptually inconsistent… In addition, micro- and macro-objects are so strongly dynamically coupled that we do not even know where the boundary between the two supposed realms could possibly be found. For these reasons it seems obvious that there is no boundary”. “Whichever interpretation (of quantum mechanics) one prefers, the classical world has been ruled out”².

4. Most surprising therefore was my correspondent’s belief that quantum physics is an extension of the physicalist paradigm, “modifying it but does not break out from it… QM is the mechanics of the very small, at the level of the atom”. I’ve never heard such a claim before and, to say the least, it is somewhat unusual. One can understand such a statement insofar as quantum physics was the continuation of the search for the ultimate building-blocks of matter. However, it went beyond the level of the atom to the sub-atomic realm. The word quantum may mean literally ‘very small’, but that is not what the early quantum physics revolution discovered. What they found was not the very small, rather that the ultimate building blocks of ‘matter’ do not really exist; the quantum ‘small amount’ actually disappeared:

This was a return to the viewpoint of the ancient religions of Hinduism, Buddhism and Taoism, and philosophers, most notably Plato, as expressed in his famous allegory of the cave. Jeans uses this allegory as the epigram for his book. Heisenberg mentions Plato specifically. Eddington was also clearly thinking of Plato’s allegory in his liberal use of the words ‘shadow’ and ‘shadowy’, not just in the quote above.

Since shadows are non-material, these are decisive statements in favour of the philosophy of Idealism, in agreement with the ancient religions, that mind is the primary reality, and that what appears to be matter is an illusion. The early quantum physicist who made perhaps the clearest statement suggesting this spiritual interpretation was Max Planck: “There is no matter as such! All matter originates and exists only by virtue of a force which brings the particles of an atom to vibration and holds this most minute solar system of the atom together… We must assume behind this force the existence of a conscious and intelligent Mind. This Mind is the matrix of all matter”⁶.

To sum up, my correspondent had said that quantum mechanics “is an extension of the physicalist paradigm, modifying it but does not break out from it”. He was therefore comparing it to Einstein’s modifying and developing of Newton’s theories to accommodate greater velocities, while remaining a classical theory. This viewpoint seems to be contradicted by the quotes above. As Stanislav Grof says in Ancient Wisdom and Modern Science: “Twentieth century physics have questioned and transcended every postulate of the Newtonian-Cartesian model… (Reality) is entirely different from the seventeenth century model used by mechanistic science… The world of substance was replaced by that of process, event, and relation”⁷.

In the next article, I’ll outline the history of the debate around quantum physics and spirituality. 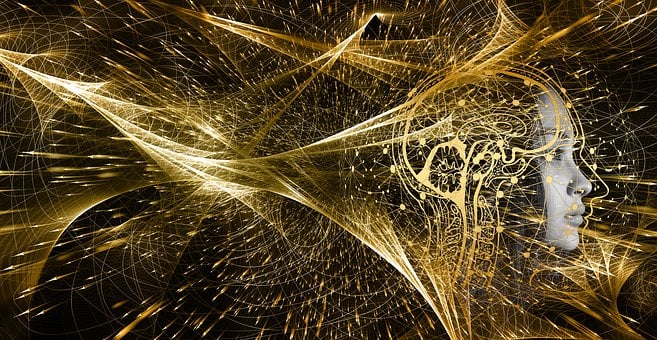 1. Some of the examples he offers are: nuclear weapons, drone technology, cyber warfare, propaganda, brain washing and indoctrination. It is not relevant to my argument whether or not these are actually developments from quantum theory or not.

The Joos quotes are taken from ‘The Emergence of Classicality from Quantum Theory’, in The Re-Emergence of Emergence: The Emergentist Hypothesis from Science to Religion, P. Clayton and P. Davies (editors), OUP, 2006, p 74–76.