I introduced this term on a previous page. Here I will expand a little on what I mean by it. 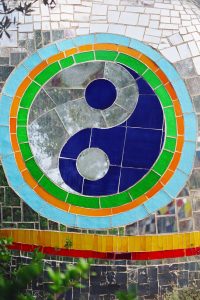 The essential point is that what we experience as our ego-consciousness is not our only self, and not even our true self. Some of the terms used to describe the deeper, usually hidden, self are:
the Self (Jung) (sometimes written lower case, the self)
the Higher Self (Psychosynthesis)
the Subliminal Self (Frederic Myers, see footnote 1)
the soul (a term used by various spiritual/religious traditions)
the Daemon (originally a term used by the ancient Greeks, for example Plato, Socrates, and Epictetus) (see footnote 2)

These concepts are not necessarily understood in the same way, but refer to something similar; they all suggest a deeper level of our individual consciousness. There is an alternative explanation, however, since some experiences suggest consciousnesses apparently other in some way, perhaps what is sometimes called a spirit guide, or other helpful being.

We are souls (individual pure consciousnesses) on a spiritual journey in the material world, where the ego is, so to speak, the representative of the deeper self. There is a plan for each incarnation, to help us grow and develop appropriately on this journey. Connecting with this plan gives our lives their ultimate purpose and meaning. This is known by the deeper self, but the ego-self can, and usually does, lose its way in its life-journey. If this plan was conceived before our birth, as some traditions believe, then this suggests that consciousness forgets during the process of incarnation. As Wordsworth said: “Our birth is but a sleep and a forgetting”3. The ancient Greeks believed, using a striking metaphor, that reincarnating souls drink from the river of oblivion, Lethe; this would explain why they have no recollection of their past lives, nor of this plan for the current incarnation.

Thus we have fallen asleep, and need to awaken. The ego needs to reconnect with and be guided by this source of higher knowledge and wisdom. It can then seek to manifest the will of the deeper self in the world. This is an alternative approach to spirituality, different from meditation and other practices. In Hinduism it is called Karma Yoga, described variously as the path of selfless action, following one’s destiny, or the surrender of the ego to the divine (thus becoming its tool).

How then do we reconnect with this higher consciousness? The following methods have been meaningful to me: dream interpretation, synchronistic events, divination (including Tarot readings,          I Ching consultations), powerful intuitions, and so-called Freudian slips.

1) Dreams are the most obvious and most available source of guidance. Many authors have written on this subject. Perhaps the most important is Carl Jung, who placed dream interpretation at the centre of his therapeutic system. He said ‘we have forgotten the age-old fact that God speaks chiefly through dreams and visions’4.
A book I especially like is Arthur Bernard’s, God Has No Edges, Dreams Have No Boundaries. His experience is that no matter what you (your ego-consciousness) may think, your ‘dreams say think again’. That is a clear expression of the idea I expressed above, that the conscious ego has lost its way, and needs guidance from a higher source of wisdom.
Dream interpretation is not just an aspect of Western psychology. It can also fit in with:
a) Hinduism. See, for example, Realities of the Dreaming Mind, by Swami Sivananda Radha, a western woman initiated into the Hindu tradition. She has created a “Dream Yoga”, and talks about the “Guru within”.
b) Sufism. I once was privileged to attend the daily meetings hosted by the Sufi teacher, Irina Tweedie. Each one began with a session of dream sharing and interpretation.
c) Ancient tribal traditions. See, for example, Patricia Garfield’s chapter in Creative Dreaming on Native Americans. She says that all tribes assign special importance to dreams.

The problem, of course, is that in modern times many people have lost the ability to think symbolically, and are not encouraged by our education system to think in this way. Dreams, therefore, may seem incomprehensible. This is highly regrettable, and steps should be taken to remedy this unfortunate development.

2) Synchronistic events (meaningful coincidences). The term was introduced by Jung. They appear to have a tendency towards growth, healing, positive change. The best known example is the case of a client of his and the scarab beetle, as described by him in Synchronicity: An Acausal Connecting Principle5. Such occurrences sometimes have extraordinary psychological/spiritual power. The Jungian writer Marie-Louise von Franz talks about shaking experiences6. Robert Aziz talks about ‘the force of a full-scale conversion experience’7. They can seem so strongly meaningful that they led Robert Perry to call his book on the subject Signs: a New Approach to Coincidence, Synchronicity, Guidance, Life Purpose, and God’s Plan.

3) Divination. This topic is complicated enough to require a separate article, (see below).

4) Strong intuitions. I have had some experiences of this, the details of which would take too long to go into here. In general terms, the ego-consciousness is suddenly gripped by what seems to be an overwhelmingly powerful idea, something irresistible. You know that it will not let go until you have performed what it demands, and when you have done this, the outcome is positive.
An outstanding example of this phenomenon with material already in the public domain is Rosalind Heywood, who talks about receiving “orders”. A powerful example occurred one afternoon when she was told by this inner voice to meet the 3 o’clock train at Wimbledon station. In order to do this, she had to borrow a neighbour’s car, which shows how important it was to her to obey such instructions. By following this “order” she managed to save the life of her husband, who had suffered a heart attack8.
It is reasonable to assume that the source of these “orders” is the hidden, deeper self, although it could obviously be something else (a spirit-guide/guardian “angel”?).

5) Freudian slip. This is now a term in common usage. Freud’s book The Psychopathology of Everyday Life introduced the world to the idea. His most powerful example, so extraordinary that it is almost impossible to believe, tells of a woman who, seeing a man in the street, fails to remember that she had recently married him. He reports that the marriage came ‘to a most unhappy end’9.
What does the phenomenon of the Freudian slip mean? In general terms, we can say that the ego tends to lie, be prone to self-deception, yet something inside wants the truth to be recognised. There is thus a hidden intelligence which somehow forces the ego to make a mistake in speech or action, revealing what it is trying to conceal. Again I assume that this other consciousness is the Higher or Subliminal Self mentioned above. Freud’s example seems to be a clear message from this hidden self, which wants the woman to recognise the terrible mistake she has made.

Footnotes:
1. If you haven’t heard of him, he is the inspiration for one of my seminal texts Beyond Physicalism by Edward Kelly et al. He was one of the founders of the Society for Psychical Research in 1882, and has been described by Guy Lyon Playfair as the outstanding psychical researcher of all time (This House is Haunted, White Crow Books, 2011, p209). His best known publication is Human Personality and its Survival of Bodily Death, available free as an online download.
2. For an interesting exploration of this concept and its appearance throughout history in different cultures, see Anthony Peake’s The Daemon: A Guide to Your Extraordinary Secret Self, Arcturus Publishing, 2012.
3. Ode: Intimations of Immortality from Recollections of Early Childhood
4. Man and His Symbols, Picador, 1978, p92.
5. Routledge & Kegan Paul, 1972 reprinted 1977 p30-31.
6. Meaning and Order, in Jung in Modern Perspective, Wildwood House, 1984, p272.
7. C. G. Jung’s Psychology of Religion and Synchronicity, State University of New York Press, 1990, p30.
8. Described by Lawrence LeShan in A New Science of the Paranormal, Quest Books, 2009, p30. Rosalind Heywood and “orders” are also discussed by Colin Wilson in Afterlife, Grafton Books, 1987 – the whole book is a great read. Her autobiography is called The Infinite Hive.
9. Penguin, 1991 p261.