THE ONGOING INFLUENCE OF PLATO 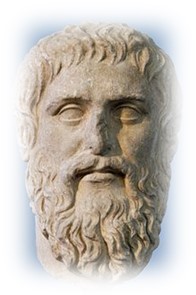 Equally significant are the thoughts of Sir Arthur Eddington who, clearly thinking of Plato, said: “Matter and all else that is in the physical world have been reduced to a shadowy symbolism”. The material world “which seems so vividly real to us is probed deeply by every device of physical science and at bottom we reach symbols. Its substance has melted into shadow” (both my italics) (6). Werner Heisenberg also made the same point: “Modern physics has definitely decided for Plato. For the smallest units of matter are not physical objects in the ordinary sense of the word: they are forms, structures, or – in Plato’s sense – ideas” (7).

St. Paul, while using a different image, here seems to be alluding to the same idea: “For now we see in a mirror, dimly, but then (i.e. when the illusion is removed) we will see face to face. Now I know only in part; then I will know fully” (p9). This passage has also been translated: “At present all we see is the baffling reflection of reality; we are like men looking at a landscape in a small mirror. The time will come when we will see reality whole and face to face” (10). This makes the connection with the cave allegory more clearly.

Philo Judaeus. We know that the Jewish religion can be very isolationist at times. This highly significant Jewish philosopher nevertheless felt the need to accommodate Jewish thinking with Plato. In the words of David T. Runia: “Philo tried to show that Jews need not be ashamed of their heritage, that loyalty to the Law did nod entail a rejection, but precisely a deepening of the ideas of Hellenism” (12).

The film-maker David Lynch seems to be heavily influenced by Plato. Of course, all cinema is a brilliant metaphor for Plato’s cave allegory, since the audience is watching images projected onto a screen, images which do not really exist, but have been created previously elsewhere. The audience can become engrossed in the film, and begin to take it for a real story. Lynch takes this idea and pushes it to its limits in his masterpiece Mulholland Drive, which is an attempt to awaken the audience to the reality of a multi-levelled universe via Plato’s allegory. The opening scene shows a soul emerging against a background of shadows on a wall! (14)

1. As Helena Blavatsky says: “Life is thus a dream, rather than a reality. Like the captives in the subterranean cave, described in The Republic, the back is turned to the light, we perceive only the shadows of objects, and think them the actual realities. Is not this the idea of Maya, or the illusion of the senses in physical life, which is so marked a featre in Buddhistical philosophy?” (Isis Unveiled, volume 1, preface Pxiii)