My starting point is a reference from the book by Foster/Clark/ York, mentioned in the introduction to this series (1). They mention a court case in 1987 about a dispute about the teaching of evolution, Edwards v. Aguillard, during which “a group of scientists, including Nobel laureates, submitted a brief… (which) pointed out that science is devoted to investigating natural phenomena and providing naturalistic explanations. In other words, a commitment to materialism is at the foundation of science” (p12).

The authors seem to take some delight in this. It should be blindingly obvious, however, that the only thing that science should be devoted to is the search for truth, not a philosophical worldview.

It is easy to understand, from a scientific viewpoint, why materialism is desirable. In order to conduct experiments, scientists have to assume that they are in control of all the variables; how could they proceed if some uncontrollable supernatural or paranormal elements were involved? Science has therefore to assume that these ingredients do not exist. Because this viewpoint is desirable, however, does not mean that it is true. If science is committed to a false worldview, then that is a serious problem for science to consider, not something that should be inflicted upon society.

The ludicrous extent to which this train of thought can lead has been provided by Richard Lewontin, a Harvard professor no less: “We take the side of science in spite of the patent absurdity of some of its constructs… in spite of the tolerance of the scientific community for unsubstantiated just-so stories, because we have a prior commitment, a commitment to materialism… Moreover, that materialism is absolute, for we cannot allow a Divine Foot in the door” (2). How can an intelligent person say this and expect others to take him seriously?

It is presumably statements like this which led the U. C. Berkeley philosopher John Searle to write: “There is a sense in which materialism is the religion of our time, at least among most of the professional experts in the fields of philosophy, psychology, cognitive science, and other disciplines that study the mind. Like more traditional religions, it is accepted without question and it provides the framework within which other questions can be posed, addressed and answered” (3).

We can argue therefore, in the language of Richard Dawkins, that the meme of materialism, which is a thin disguise for atheism, has infected the minds of many modern-day academics. An unpleasant mental illness is trying to take over society and culture.

Now, if you are committed in principle to materialist explanations, then it is obvious that this is what you will find, whether or not they are credible. Charles Darwin was a dedicated materialist, as revealed in some of his notebooks. There had been earlier theories of evolution “softened by a reliance of vital forces, organic striving, teleology and the like”. However, “Darwin’s theory was distinguished from all the others by its unremitting materialism”. He was a forerunner of modern neuroscientists and materialists, arguing “that the mind was nothing but a special configuration of matter” (4). 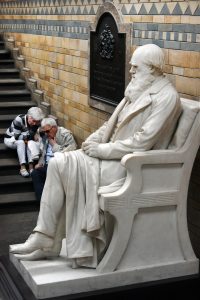 And he has been honoured with a statue at the Natural History Museum, where he can indoctrinate young children. What a sad state of affairs!

As Tom Bethell points out, “if full-blown materialism is true, then Darwin’s theory of common descent must also be true”. Since complex organisms exist, “atoms and molecules in motion must have somehow whirled themselves into the far more complex structures that we see around us” with all the intermediate stages. Even natural selection is therefore unnecessary. Once this is taken as a given, “the true-believing materialist no longer needs to study evolution in any detail”. Any inconvenient anomalies can therefore be swept under the carpet; “Darwinism becomes little more than a deduction from a philosophy. The science is redundant” (5). It is obviously for reasons like this that philosopher Mary Midgley wrote a book called Evolution as a Religion (6).

Darwinian evolution is one of the cornerstones of the religion of atheism. As Richard Dawkins, with refreshing honesty, has said: “Darwin made it possible to be an intellectually fulfilled atheist” (7). The relevant question, which Dawkins failed to notice, is, why is he so determined to commit himself to a philosophical position which might be a lie? Perhaps it would be a better use of his time to try to understand why he is so desperate to be an atheist. I would recommend a course of psychoanalysis, rather than trying to convert others to his problems.

A form of Christian Fundamentalism, with a belief in the literal truth of the Bible, was the dominant worldview in Victorian Britain. A well-known laughable example is the calculation, made by James Ussher, of the age of the Earth, based upon the ages of the patriarchs in the Old Testament, that creation happened on October 23, 4004 BC. Since this is something easily refuted by geology, this was an occasion when science had to win. It is reasonable to claim, therefore, that at that time Darwinism, as part of a developing scientific worldview, was necessary in order to move forward and make progress. It is important, however, not to throw out the baby with the bathwater. We have now reached the point when a new revolution is necessary in order to overthrow Darwinism.

(2) Billions and Billions of Demons, New York Review of Books, 1997

(6) Routledge, 2002, as mentioned in the Introduction to this series