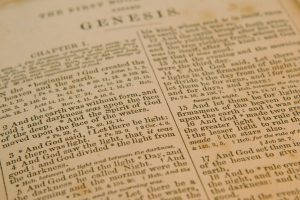 It is well known that Christian Fundamentalists believe that the Bible is the actual word of God (whatever that means), and further that it should be interpreted literally. It is hard for most people, including many Christians, to take such ideas seriously. Even worse, this offers atheists the opportunity to dismiss religion out of hand, since believers like these appear so ridiculous, making them an easy target. The Bible remains an incredibly important document, worthy of serious study, but this should be done from a different perspective than that of the Fundamentalists; only then can we assess its true worth. With that in mind, I am going to write a series of articles which will attempt (and probably fail) to get to the bottom of Genesis 1, thus the process of creation.

A few preliminary remarks are necessary:

I’ll begin with the problem of literalism. The text is full of the words earth, waters, light, day, night, sky, with which we are very familiar. It would therefore be easy to think that these words refer to what we normally understand by them, and on some occasions it would seem that they do. However, it will be obvious to anyone with an understanding of the language of symbolism that these words do not always have their usual meaning. To take one simple example, Genesis 1.7 says: “So God made the dome and separated the waters that were under the dome from the waters that were above the dome”, and then at 1.9: “And God said, ‘Let the waters under the sky be gathered together into one place, and let the dry land appear’ ”.

Certain Christians have taken this literally and (I swear I am not making it up) have arrived at the following conclusion: “It has become almost a recent-creationist dogma that ‘the waters which were above the firmament’ of Genesis 1.7 formed a vast canopy of water vapour above the earth’s atmosphere. This, they say, was all precipitated in the days of Noah, thus causing the Flood… The idea was popularized by Whitcombe and Morris in their classic, The Genesis Flood. They have so much to say about it that there are about twenty page-references to it in their index”. I am quoting Alan Hayward (1), who then says that these authors “do not offer a single calculation in support of their idea”. He goes on to demolish the idea from a scientific perspective, even though the idea is so ridiculous that this should not be considered necessary. 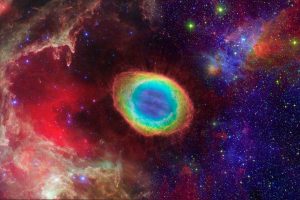 What should we really understand by ‘the waters’? It seems obvious, to me at least, that Genesis 1 is describing the creation of a hierarchical (multi-level) universe. The word ‘heavens’ is therefore a symbol for the higher, divine spiritual realms, the ‘waters’ the lower non-material levels, thus the psyche (other relevant words might be astral, or etheric), and the ‘earth’ the material universe. At the very least, this scenario would fit more closely with what other spiritual traditions have to say.