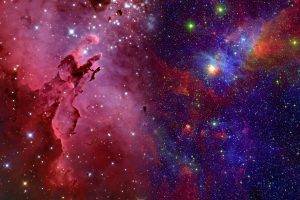 This article is the second in a series on Genesis chapter 1 (1), and can also be seen as part of a long-term theme, Why Christianity Must Change or Die (2). My main purpose is to discuss the process of creation. Before embarking on that, however, I thought it would be interesting to mention briefly the problem of what we should understand by the word God in this chapter.

The Bible opens with: “In the beginning when God created the heavens and the earth…” The word used for God is Elohim. The etymological origin of the word is not clear, but it is well known nowadays that it is a plural word, which leads to speculation whether gods would be a better translation. Less well known is that the verb following is a singular form. This seems confusing, but suggests that “God in its (or his if you prefer) plural form created…” would be a better translation. What we are meant to understand by that is not clear, and we can only speculate. It sounds like some kind of committee, and it would make sense if we understand the Elohim as high-level spiritual beings, emanations from the Divine Oneness. Such an interpretation would cause some consternation among monotheistic Christians. Some time ago, I remember reading a preface in an edition of the Bible where the editors/translators said that they were aware that Elohim was a plural word, but that because Christianity was a monotheistic tradition, they had chosen to translate it as God. I’m sure they were sincere people who meant well, but in effect they have deliberately mistranslated the text in order to help Christians remain comfortable, and not have to be challenged and consider what the text might actually mean.

Since writing the above, I have come across this interesting passage in a book by Robert E. Cox, where he is describing creation as outlined in the Vedic texts of Hinduism: “…the Creator (3) became the embodiment of all the universal gods directly responsible for upholding the created appearance of the universe and of all the virtual vacuum states that exist on different scales of space and time. Having awakened or warmed the universal gods, the Creator then directed them to create the universe by transforming the virtual universe into the real universe… Through his own divine will (which is nonlocal), by means of pure intention, he directed the gods to create the universe. In this way, the gods created all the material worlds and all the beings that inhabit them…” (4).

This would seem to be in line with my interpretation above; the first line is almost a paraphrase of “God in its plural form”. It would further suggest that the ‘God’ of Genesis 1, in the text as it has come down to us, is not what is usually understood by Christians as the Creator, rather some kind of emanations from the Creator.

Part of Cox’s purpose is to establish a common ground linking Indian, Egyptian, Hebrew and Greek traditions which, he believes, are different strands of one Ancient Wisdom, which is one way of looking at the Perennial Philosophy. Perhaps Genesis 1 should be seen as an important contribution to that.

(1) Click on The Folly of Literalism for the first.

(3) In the Hindu system the name of this God would be Brahma.