In previous articles on the theme of quantum physics, I have made frequent reference to the enthusiasm of its pioneers for Plato, and his allegory of the cave with its shadows on a wall. Sir James Jeans, for example, used it as the epigram for his book The Mysterious Universe. The clearest statement came from Werner Heisenberg: “Modern physics has definitely decided for Plato. The smallest units of matter are not physical objects… They are forms, structures, or — in Plato’s sense — Ideas”. 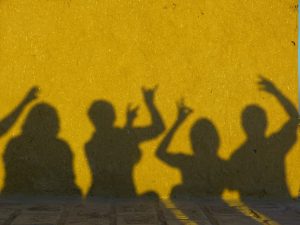 If modern physics has decided for Plato, what has it decided against? On the evidence of that quote, it would be the philosophy of materialism, which is still so influential in science today despite the quantum revolution. Another possibility could have been Aristotle, who was once Plato’s student, but later went his own way and developed his own philosophy. However, it would seem that on the issues brought up by quantum physics, Aristotle held similar views to Plato. Heisenberg, in addition to the quote above, also refers to Aristotle: “The probability wave means a tendency for something. It is a quantitative version of the old concept of ‘potentia’ in Aristotelian philosophy. It introduces something standing in the middle between the idea of an event and the actual event, a strange kind of physical reality just in the middle between possibility and reality”.

I came across that quote in a book by Lothar Schäfer¹, who then continues:

We are left to wonder how Plato and Aristotle came to such conclusions (similar ideas can also be found in Hinduism) without the benefit, we assume, of 20th century technology. (It is an ongoing theme of mine that there was once an Ancient Wisdom, which to some extent has been lost). Schäfer says: “It is not quite clear how Aristotle arrived at the view that forms help matter to become real, or how he was able to defend it. Sometimes it seems that inspired ideas need no defence and it is immaterial how they were derived”.

While we’re on the subject of Aristotle, it is interesting to note that, even though he broke away from Plato, he nevertheless held many views consistent with a modern spiritual perspective, in opposition to materialism. From my perspective, divinity is both transcendent and immanent. And Aristotle is an animist, and believes in teleology; no wonder he has been rejected by the modern ‘Enlightenment’. It would seem that, as well as seeking a reunification of science and religion, we would also benefit from a reunification of Platonism and Aristotelianism.

1. In Search of Divine Reality: Science as a Source of Inspiration, University of Arkansas Press, 1997. The following quotes are from pages 46 and 47.