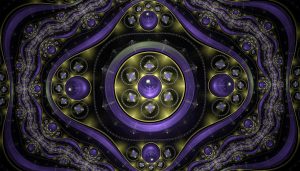 If interested, please see footnote (1) for links to the first three parts. It is not necessary to have read them in order to understand what follows.

My purpose here is to reconcile the text of Genesis 1 with certain other spiritual traditions, even if that connection is not immediately apparent from the text as we have it. These traditions say that there is an ultimate ground of being, described as a void, emptiness, or nothingness which, paradoxically, in another manifestation, is also a fullness or pleroma, the totality of all that is, an ultimate oneness, which is creative. (Let’s call this the ‘God’ of Genesis.) It then divides and separates in a series of emanations, descending in a process of progressive increasing density through several levels, until it eventually becomes the material world. These levels have been given names like soul, causal, mental, astral, etheric, and physical. These terms are usually applied to human ‘bodies’ at the different levels. If this cosmology is correct, however, it would be a reasonable assumption that the same could be said of all creatures, and perhaps of larger organisms like the Earth, and even things considered inanimate. (Thus, there would be an astral, mental level, and so on, to the whole solar system, the whole universe.)

I believe that Genesis 1 should be interpreted from this perspective; words like ‘waters’, ‘earth’ are not to be understood literally, rather symbolically. ‘Heavens’ are therefore not the skies, but a symbol of the higher, divine spiritual levels; the ‘waters’ are the lower non-material ones, and the ‘earth’ the material universe. This scenario would fit with what other spiritual traditions have to say. That does not mean that there are no confusing passages and apparent contradictions within the text, but it does at least give some insight into what the original author might have meant.

This scenario opens up the fascinating possibility that evolution, the development of organisms, and reproductory processes take place at other levels as well as the material. This would help to resolve some of the problems of morphogenesis identified by Paul Davies in his book The Cosmic Blueprint (2), and is also an idea explored by Rupert Sheldrake with his concepts of morphic resonance, morphogenetic fields, and formative causation (3).

Thus there are higher and lower waters. I think it would be ridiculous to try to interpret this literally in reference to actual water. The text continues in verse 9: “And God said, ‘Let the waters under the sky (i.e. the dome) be gathered together into one place, and let the dry land appear’. And it was so”. According to the spiritual interpretation, this means that the material universe (dry land) emerges from a non-material level (the lower waters), known as astral, or etheric. The text indeed suggests that the appearance of the dry land is a consequence of something happening to the waters. (What would gathering all the physical waters into one place mean?) This is essentially what quantum physics has come to discover, as originally expressed by Werner Heisenberg, Sir James Jeans, and Sir Arthur Eddington (4), and more recently by David Bohm in Wholeness and the Implicate Order (5), and Unfolding Meaning (6), which is a very interesting title from this spiritual perspective. I take his concepts of Implicate and Explicate Orders to refer respectively to the lower waters and the physical universe.

Verse 20 says: “And God said: ‘Let the waters bring forth swarms of living creatures, and let birds fly above the earth across the dome of the sky’ ”. Verse 24 says: “And God said ‘Let the earth bring forth living creatures of every kind’ ”. I’ve read some Christian texts which have tried to reconcile Genesis 1 with the evolutionary history of life put together by Darwinian biologists, obviously with a view to making Christianity more credible to scientists. I suggest that a spiritual interpretation makes more sense of the text; creatures appear in non-material levels (verse 20, the waters and the sky) before they appear in the material (verse 24, the earth). It would make more sense, from a traditional spiritual perspective, if the two statements of verse 20 were reversed. ‘Birds’ are a well-known symbol of the soul because they fly in the ‘skies’, thus higher levels, which in theory should be necessary in order to generate the creatures of the waters. Thus ‘birds’ would not refer to the creatures with which we are familiar, rather to the soul-level of the creatures of the lower waters. However, the fact that they are both mentioned together as a prelude to life at the material level is significant.

I accept that there are other parts of the text which are difficult to interpret from this perspective. I can only speculate on the reasons for this: have there been editorial changes, meanings lost in translation, or am I reading too much into the text? I suspect, however, that when the original Hebrew version was written, it was, for whatever reason, more profound than the version that has been handed down to us. If that is the case, even though atheists and scientists may mock and dismiss the picture presented, it is possible that the author or authors of Genesis 1 may have been onto something very profound.

(4) Werner Heisenberg: “The smallest units of matter are not physical objects in the ordinary sense of the word: they are forms, structures, or — in Plato’s sense — Ideas” .

Sir Arthur Eddington: “Matter and all else that is in the physical world have been reduced to a shadowy symbolism”. The material world “which seems so vividly real to us is probed deeply by every device of physical science and at bottom we reach symbols. Its substance has melted into shadow”.